His interest in pottery started at an early age, it came from his mother, the well known Lancashire potter Joan Bideau. Richard's interest in crystalline glazes came after an article which he read in New Scientist magazine. He was intrigued by the possibility of combining his knowledge of chemistry with the freedom of expression offered by pottery. Starting with a published glaze recipe, Richard embarked upon a journey of experimentation that has, after many thousands of test, resulted in a unique range of crystalline glazes. Richard now has an international reputation for the quality of his glazes and fine porcelain forms.

The crystalline glaze is one of the most challenging effects that the studio potter can strive to perfect. The spectacular appearance is due to crystals that form within the glaze during firing.

Like frost growing on a cold window pane, the crystals are formed at random, but unlike ice, they are created when the intense heat of the kiln transforms the initially dull glaze into a sparkling array of brilliant shapes and colours – a process which mirrors the formation of minerals within the Earth's mantle.

The crystals are three dimensional and as light catches them they shimmer like holograms.

Sort by:
Best sellers Relevance Name, A to Z Name, Z to A Price, low to high Price, high to low
Showing 1-7 of 7 item(s) 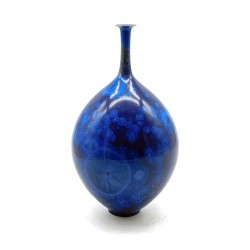